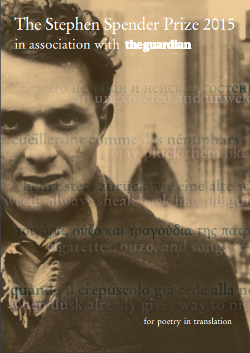 Stephen Spender Trust has been swiftly removing the evidence

London/Odense/Amsterdam/Eenrum (NL) – Early November 2015, an English translation of a poem by Dutch author Rutger Kopland (1934-2012) was awarded the prestigious Stephen Spender Prize 2015 for poetry in translation. Another Kopland translation by the same translator was granted a commendation.

And British daily The Guardian (media partner of the prize), reported that all five of the Kopland translations that the translator had submitted were ‘superb translations’.

International research by poetry translators and specialists in plagiarism from the UK, Netherlands and Denmark shows that in actual fact these aren’t superb translations at all, but blatant plagiarism. Allen Prowle, the lauded ‘translator’ simply lifted five translations wrought by the late James Brockway and the living Willem Groenewegen from the internet, slightly adapted them and subsequently submitted them under his own name.

When the results of this investigation were made public, the plagiarist confessed and ‘his’ lauded ‘translations’ were withdrawn – a unique occurrence in the history of literary plagiarism, where usually the culprits remain in denial of committing this crime – yes, it is a crime – till the end of their days.

But the story doesn’t end there. The Stephen Spender Trust, main organiser of the prize, has been swiftly removing any evidence from their site over the last few days to cover up this embarrassing situation, without actually publishing a statement on the matter.

There is quite a logical explanation for this: the Stephen Spender Trust appointed four ‘learned’ poets as members of the prize jury who weren’t able to judge these translations for what they were. Oddly enough, that appears to have become a common occurrence where British literary publications and prizes are concerned. Which explains why cases of plagiarism have been exposed all too often in the British poetry scene in recent years.

One has only to think of the cases involving a poem by Helen Mort that was plagiarised by Christian Ward (see: Alison Flood. ‘Poetry competition winner exposed as plagiarist.’ The Guardian, 14 January 2013)  and the recent case of Sheree Mack’s volume ‘Laventille’ (see: Kate Evans-Bush. ‘Poetry has a plagiarism problem‘. www.littleatoms.com, 6 July 2015). And now this.